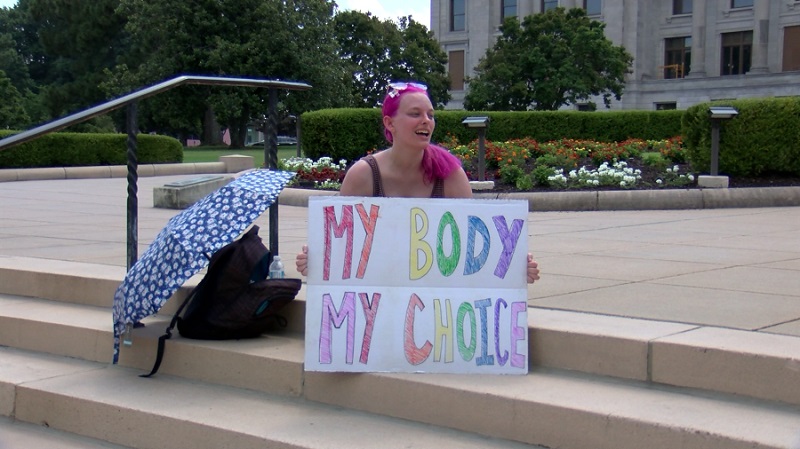 Little Rock, Arkansas — The Human Life Protection Act in Arkansas makes abortions illegal except to protect the mother’s life in a medical emergency. Only medical providers are punishable by the 2019 trigger law which made abortion a felony, with up to 10 years in prison and up to $100,000 in fines.

While some Arkansans celebrate the decision, others are firmly against it.

If you are younger than 50 years old, federally protected abortions have always been a reality before Friday. “I’m really excited, and I’m really thankful,” expressed Abby Hereford.

While Melissa Ray said she was, “Absolutely devastated that it’s changed.” Ray favors the legalization of abortion, and the SCOTUS’s decision has her asking different questions she never had before. Like will traveling to another state for abortions always be legal, or how long before contraceptives or in vitro fertilization is questioned? “I don’t know what’s going to change, and that’s what makes me the most afraid,” Ray lamented.

Abby Hereford favors a ban on abortions. She is a young mother herself and sees the debate differently. “This is not about women and women’s rights. It’s about protecting life, and the life that’s most vulnerable is the life that has no voice,” Hereford asserted.

While Hereford argues that the Supreme Court’s decision restores value to life in all stages, Ray says it devalues women, particularly in Arkansas where no exceptions for abortions are made due to rape and incest.

“Personally, I’ve been raped three times,” Ray admitted. “I cannot imagine taking to term a pregnancy that was not my choice, to begin with.”

Hereford argued, “Life isn’t determined if it’s wanted or even if its parents particularly value it. It’s human life, and we need to value that.”

During the Attorney General’s certification of the state’s abortion ban, Governor Asa Hutchinson was asked if he planned to ask the Legislature for exemptions to allow abortions in cases of rape or incest during the next special session, and he said he does not.