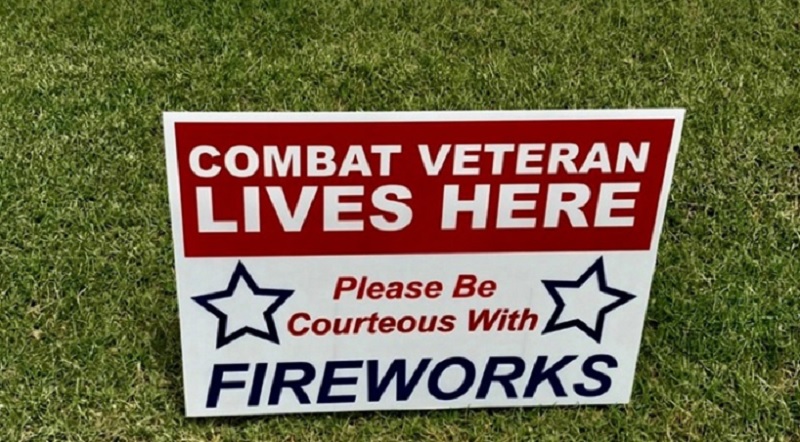 But before you set off your fireworks in your backyard, you may want to check with some of your neighbors first. “Fourth of July means freedom and liberty,” said Chris McCleary, who is an Air Force Veteran.

Especially for those who have served our country, independence Day is a time for celebration. “The Fourth of July is about this country and that flag,” said Sgt. Maj. Lance Nutt, Marine Corps. “For a veteran, it’s for those who serve under it and serve for it, and has seen too many of their comrades buried under it.”

Fireworks are a quintessential part of celebrating that freedom. “There’s a there’s a special memory and sparkle in all of our eyes as we watch others enjoy the true meaning of Fourth of July and enjoy it through celebrating fireworks,” said Sgt. Maj. Nutt.

“For a lot of veterans, the fireworks are probably going to signify what they fought for,” said McCleary. But for those veterans who have Post Traumatic Stress Disorder, fireworks can be stressful and can be more of a reminder of the fighting than a symbol of freedom.

According to data from the U.S. Department of Veterans Affairs, between 11 and 20% of veterans who served in Iraq and Afghanistan have PTSD in a given year. That number is about 12% for Gulf War veterans and jumps to 30% for Vietnam veterans.

After McCleary left the Air Force, he got the education he needed to become a Licensed Professional Counselor with a practice here in Northwest Arkansas. He said his experience in the military helps him connect with people of a lot of backgrounds who are working through a variety of problems in their life. “So you got the bright lights, the flashes, you got the big noise sounds like a gunshot,” he explained about why fireworks are triggering. “But it’s also the smells that might bring back the memories. Any one of these sudden, quick, profound sensory stimulations can trigger them right into a PTSD event.”

According to him, someone experiencing an event like this might have a far away look in their eyes. They may also try to do what they did in the traumatic memory, such as hide or run. He said these events can trigger feelings of fear, anxiety, and guilt if they had an incident where they weren’t able to save someone.

This trauma isn’t just limited to veterans, he said. He described a patient of his who was stuck in a grocery store when a shooting happened and they have PTSD from that event that could be ignited by fireworks. “So even for me today, anytime a loud bang happens, it immediately takes me back to a time when there were multiple opportunities of when we were being attacked by the enemy with explosive devices,” said Sgt. Maj. Nutt, now runs Sheep Dog Impact Assistance, a non-profit that works to reengage our veterans and first responders through various programs.

According to McCleary, some veterans will put out signs in their yard letting people know that there is someone living with PTSD in the home and to avoid shooting off fireworks near them. Some might use coping mechanisms to try and distract themselves from the firework noises, while others might just leave town completely for a place of peace and quiet.

And you can always reach out to those veterans in your neighborhood and have a conversation. “If you know of a veteran, just ask, ask if it’s going to be a problem,” he said. “Let people know that hey we’re going to do fireworks on a particular night,” said Sgt. Maj. Nutt. “A good way to engage and involve communities with veterans is to reach out and let them know that they are free to participate, welcome them to the event.”